Food Prices Rise in Russia Owing To Embargo on Import of Western Food.

Food prices are rising in parts of Russia and experts say the state embargo on imports of Western food appears to be making things worse. 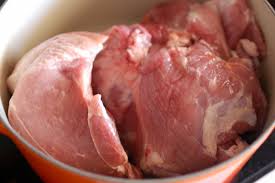 ….pork meat.
Since the ban was imposed on 7 August imported pork used in processed meat in Moscow has gone up by 6%, Russian business daily Kommersant reports.
http://www.bbc.com/news/world-europe-28849726