Deprecated: The $control_id argument is deprecated since version 3.5.0! in /home/gour5100/public_html/wp-content/plugins/elementor/modules/dev-tools/deprecation.php on line 304
 EWEDU ! – Gourmet Guide234 Kitchen 
Deprecated: Hook elementor/dynamic_tags/register_tags is deprecated since version 3.5.0! Use elementor/dynamic_tags/register instead. in /home/gour5100/public_html/wp-includes/functions.php on line 5758

In days gone by, short sharp brooms were always used to shred the steamed leaves into tiny bits, but today some ‘tush’ looking – sophisticated – brooms are now being used.

Most big supermarkets and shopping malls in Nigeria have these in abundant supply. It’s pertinent to note that women usually add potash known as kaun in [yoruba language] and akawa in [ibo language] to the boiling leaves, to soften the leaves.

These edible leaves of plants contain mineral matter like iron, calcium, iodine, vitamins (c in particular) and many others.

Numerous kinds of soups and stews can also be prepared with these vegetables and so many other vegetables we have in this beautiful country called NIGERIA.

Here is an example!

The soup is a combination of ewedu leaves and okro. The end product is a powerful draw soup that slides down the throat as a good Nigerian soup! The unique feature of this soup is the fact that no  OIL is required, just salt is enough!

Only salt to taste, no seasoning required

PUPURU is a delicacy made from cassava and relished by the Ondos with this kind of Aselu/Asepo soup and other kinds of soups that are also peculiar to the people. Pupuru, as a fermented cassava meal, is not like garri, lafun or fufu which are all local meals from cassava.

The traditional processing of cassava into pupuru involves first peeling the bark of the cassava tubers and then steeping of the peeled tubers into pots partly buried in holes dug by flowing rivers or streams and these are usually close to the cassava farm. The soakings are usually between four to six days. This is to allow fermentation to occur.

Traditionally, people soak the peeled tubers in stream water fetched in pots to enable the easy washing of the cassava by the fifth or sixth day, and this requires abundant water for cleaning.

The fermented cassava are arranged in sacks to drain off the water and moulded into balls ready for drying by the fire. Once dried, the cassava balls look brownish or black on the outer part, and this has to be scraped before it is pounded into flour and then sieved to remove unwanted dirt and chaff. The fine flour is added to boiled water and cooked into pupuru meal.

An internet report revealed that this local cassava meal has been scientifically proven to be rich in carbohydrate, but low in protein and other micronutrients; hence it is not recommended for diabetics. Well, other swallows like eba, semo or amala can be served in place of pupuru. 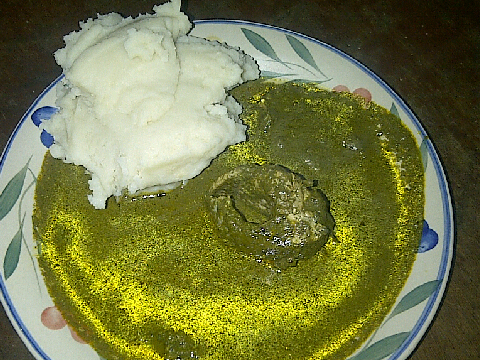