Deprecated: The $control_id argument is deprecated since version 3.5.0! in /home/gour5100/public_html/wp-content/plugins/elementor/modules/dev-tools/deprecation.php on line 304
 KULI – KULI – Gourmet Guide234 Kitchen 
Deprecated: Hook elementor/dynamic_tags/register_tags is deprecated since version 3.5.0! Use elementor/dynamic_tags/register instead. in /home/gour5100/public_html/wp-includes/functions.php on line 5758 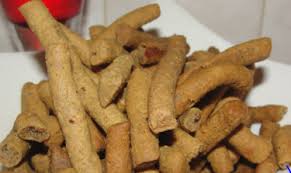 Kuli-kuli is a crunchy Hausa snack that is primarily made from peanuts otherwise known as groundnuts.

It is a popular snack  that is well known and relished in Northern and some parts of Southern Nigeria and of course the North is the place where this salty snack originated from .

This protein and fat enriched snack is also peculiar to  Ghana.

Commonly reffered to as street snack, it is often eaten alone or with a mixture of garri, especially the sour tasting South West garri popularly called Ijebu Garri.  Sugar, milk and water  are mixed together as  “garri soakings” and taken alongside the snack.

Similarly, some people in the North especially, eat this kuli – kuli  with kooko, that is watery pap, fura and is sometimes ground and put into salad in the North.

Kuli – kuli  is often ground into powder and  used as an ingredient for Suya and Kilishi. To make Kuli-kuli, groundnuts are roasted and then ground or blended into a paste. The paste is then mixed with spiceslike ginger, garlic, salt, and sometimes ground pepper. This  paste is usually drained of excess oil with water, and made into the desired shapes.

The commonest shapes of this flourless oily cookies could be round balls shapes, square flat shapes and cylindrical shapes amongst others.

The oil removed in this process is then heated and used to fry the shaped peanut paste until it solidifies. It is then removed from the oil and allowed to cool down until ready to be eaten.