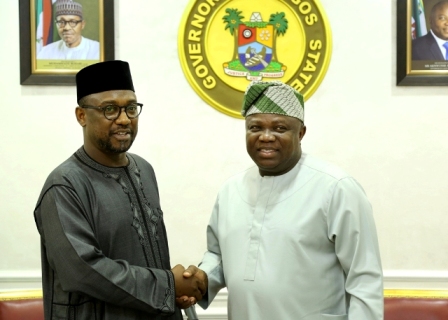 The Lagos State Government says discussion about the development of agricultural commodity value chain with Niger State aimed at ensuring food security and job creation for the two states and the country has started.

The government stated that the Lagos-Niger partnership, the second of its kind that the state would be entering into under the Governor Akinwunmi Ambode administration, would be directed at boosting the Gross Domestic Product of the two states.

Ambode, spoke during a courtesy visit by the Niger State Governor, Abubakar Bello, to the Lagos House, Ikeja.

He stated that  the state had also entered into partnership with Kebbi State on the development of the agricultural commodity value chain.

He added that the Lagos-Niger partnership was aimed at producing 70 per cent of Nigeria’s rice requirements annually, as well as boosting the production of wheat, groundnut, maize, millet, sorghum and sugarcane, among others.