Deprecated: The $control_id argument is deprecated since version 3.5.0! in /home/gour5100/public_html/wp-content/plugins/elementor/modules/dev-tools/deprecation.php on line 304
 MIYAN KUKA – Gourmet Guide234 Kitchen 
Deprecated: Hook elementor/dynamic_tags/register_tags is deprecated since version 3.5.0! Use elementor/dynamic_tags/register instead. in /home/gour5100/public_html/wp-includes/functions.php on line 5758

Good day everyone, welcome to another exciting time on Gourmetguide234!

Today we will be talking about the LUNGUDA tribe from Adamawa state. The Lunguda are an ethnic group living in Adamawa and Gombe State in Nigeria.

Traditionally, the staple crop of the Longuda is Guinea Corn (Sorghum bicolour). This used to be grounded on stone hand mill and cooked into a thick paste, called “tuwo”, which is mostly eaten with vegetable soup.

Today, however, rice, maize, and millet have now formed part of the staple of the Longuda. Guinea Corn still remains the dominant crop grown by the Longuda.

We will be looking at one of the popular soup of the Lunguda tribe called Miyan kuka.

To get the best of this recipe, one of us, Adeyemi Jeremiah, an Agric Engineer, had to contact a friend from Adamawa who resides in Jos, Miss Irene Dishon, a graduate of University of Maiduguri. She studied English Language and she hails from Guyuk local government area of Adamawa state.

A chat with her produced this recipe!

Miyan Kuka is also called Luru soup. The Baobab leave is one of the major ingredient used in preparing the sumptuous soup; it is one of the simplest northern soups made with dried fish.

Miyan kuka is made using dried baobab leaves; the leaves are usually sun-dried and then ground into powder form. The baobab leaves then serve as a thickener for the soup once it is dried.

Miyan kuka has a greenish look once it’s prepared, but you can add a little bit of palm oil to it to brighten the look.

Miyan Kuka is so easy to prepare that you can just fix this up within 20 minutes.

Miyan kuka is very delicious and has a lot of health benefits in case you didn’t know; the leaves are rich in Vitamin C as well as other nutrients such as alpha. 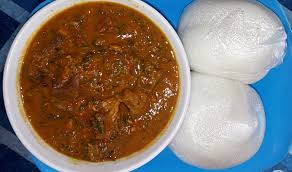