An Australian woman accused of carrying out the act in “spite” has since been arrested.

It is not clear if the strawberry punnet, which was bought on Saturday morning, was domestic to New Zealand or imported from Australia. But  the person who found the needle was not harmed

However, the store has removed all strawberries from its shelves as a “precautionary measure”. MPI say the matter has been referred to the police, adding that they were currently conducting an investigation. This is the latest incident to take place in New Zealand since a needle was found in a punnet of Australian – imported strawberries  earlier in September

The BBC has also reported that New Zealand’s two largest food distributors – Countdown and Foodstuffs  have reportedly stopped importing Australian strawberries due to the scare.

The nationwide scare in Australia saw hundreds of punnets of strawberries pulled from shelves. But some reports turned out to be hoaxes and others are thought to be copycat cases or social media stunts.

However,  an Australian woman  who has been accused of putting needles inside strawberries, was arrested earlier this month. She worked as a supervisor at a strawberry farm north of Brisbane and she is alleged to have been motivated by spite.

She however faces up to 15 years in prison if found guilty. 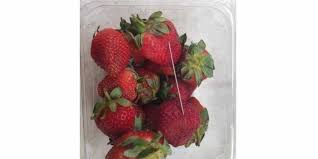