Osun state government orders butchers in the state to pay a levy of N700 on every cow slaughtered! 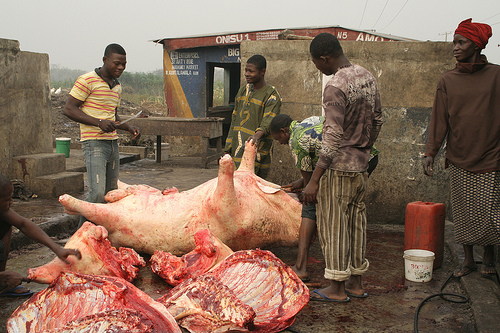 The Osun state government has reportedly ordered butchers in the state to pay a levy of N700 on every cow slaughtered for sale.

This  announcement followed a decision reached at a meeting between the state government and Osun Cattle Butchers Association in Osogbo.

Wale Adedoyin, a consultant to the state government, who represented it at the meeting, told newsmen that the levy was introduced to boost internally-generated revenue of the state. According to him, parties at the meeting agreed that henceforth the establishment of a new slaughter slab will attract payment of N50, 000.

Adedoyin, a former commissioner for agriculture and food security in the state, added that registration of each member of the butchers association would attract N2,500 while annual renewal of registration would cost N1,000.

He however explained that the levies became necessary in order to improve on the finances of the state, adding that proceeds from the levy would also be used for provision of necessary facilities and the abattoirs. He said the levy was not intended to cause hardship or pains to the butchers, and appealed to them to cooperate with the government.

Also speaking, Bukola Aluko, coordinating director, ministry of agriculture, food security and youth engagement in the state, assured butchers that the government would provide facilities and support them to make their operations easier.

In their reaction to the development, Sulaiman Adebimpe, chairman and patron of the butchers association, and Tiamiyu Alamu, respectively expressed gratitude to the state for always involving them in decisions that affect the group.

They assured that their members would strive to comply with the levy directive.