Deprecated: The $control_id argument is deprecated since version 3.5.0! in /home/gour5100/public_html/wp-content/plugins/elementor/modules/dev-tools/deprecation.php on line 304
 Yam! – Gourmet Guide234 Kitchen 
Deprecated: Hook elementor/dynamic_tags/register_tags is deprecated since version 3.5.0! Use elementor/dynamic_tags/register instead. in /home/gour5100/public_html/wp-includes/functions.php on line 5758

Yam is a household name in Nigeria  and it is reffered to as one of the popular staple foods widely consumed by Nigerians. It is a preferred source of carbohydrate and income for millions of people in the country.

Whether you believe it or not, Nigeria ranks as the largest yam producer in the world, contributing over two-thirds of global yam production yearly, although Ghana is fighting to overtake this figure.

Take it or leave it – The Ghana yam that has flooded the global market came from the most populous black nation in the world – NIGERIA!.

It is no longer news ! Nigeria has officially  kick-started the export of Nigerian yam to the different  parts of the world .

The Nigeria Yam Export was reportedly launched at Lillypond Container Terminal, Ijora, Lagos on Thursday, June 29,  2017, by the minister of agriculture, Audu Ogbeh. 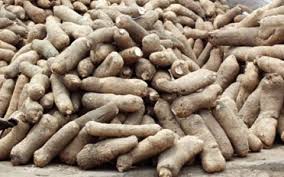 Well, a new yam season is here again, thank God for the harvest period which is all across the country!

As a common name for some species in the genus Dioscorea family (Dioscoreaceae), this root vegetable is a perennial herbaceous vine cultivated for the consumption of its starchy tuber in Africa, Asia, Latin America and Oceania.

In fact, history tells us that this root vegetable which is regarded as a highly valuable resource in our country Nigeria, was first cultivated in Africa and Asia in 8000 AD.

There are hundreds among the cultivated species of yam. The major species  are the white yam called Dioscorea rotunda and the yellow yam called Discorea cayenesis.

They are the mostly cultivated yams in Africa. In the past, they were considered as two species though most people now regard them as the same specie.

Other types are Discorea alata called water yam, the winged yam and purple yam, which has the largest distribution worldwide.

There is also the popular Discorea batatas called Chinese yam. This yam is somewhat smaller when compared to other species of yam.

Discorea bulbifera is known as the air potato. It is found in both African and Asian dishes.  Its equally pertinent to note that some varieties of yam can be eaten raw while some require soaking or boiling for detoxification before eating.

Apart from being boiled, yam can also be fried, roasted and even grounded into yam flour to make the likes of elubo, hmmn amala!.

…from elubo to amala!

send your long comments, suggestions, questions and recipes to gourmetguide234@gmail.com!